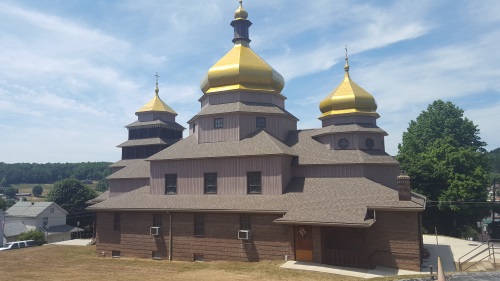 The origins of St. Mary’s parish in Barnesboro date back to the last decade of the 19th century.  Attracted to the area by prospects of employment in the local mines, a sizeable Slavic immigrant population was already there when Barnesboro was incorporated in 1894.  These early settlers hailed from both sides of the Carpathian Mountains.  By 1897 the Greek Catholic Union, a fraternal organization, had acquired a hall in which the Reverend Cyril Gulovich, O.S.B.M., celebrated the first liturgy.  By June 25, 1898, a frame building was erected on Chestnut Street, and property for a cemetery was purchased on November 5th of the same year.  Being the only Catholic Church in Barnesboro, St John’s served all the Catholic faithful of Barnesboro for almost 6 years before a Latin rite parish was established.

During the first decade of the 20th century the parish grew phenomenally. In 1908, there were 232 baptism registered. Shortly after the Holy See named Bishop Soter Ortynsky, O.S.B.M., as the ecclesiastical Superior for all Byzantine Catholics in America, opposition from many quarters arose. In 1910 bishop Ortynsky was forced to bring ecclesiastical penalties against the trustees of Saint John’s. This resulted in the separation of the parish from Bishop Ortynsky’s jurisdiction for about a year.

In the meantime, about a hundred families with origins on both sides of the Carpathians remained faithful to Bishop Ortynsky and the Holy See. They banded together and formed the nucleus of their new St. Mary’s Ukrainian Catholic Church dedicated to her Immaculate Conception.  By June 15th, 1911, during the pastorate of Reverend Victor Kowalytsky, five lots were purchased on Campbell Avenue at North 15th Street across the line in Spangler. Three years later a new framed church was dedicated by the Very Reverend Peter Poniatshyn. Land for a new cemetery was purchased on November 16, 1916.

In August of 1955 Reverend Myron Holowinsky was named pastor of Immaculate Conception Parish. A parish hall was built in 1960 to serve as a center for parish activities.

Early in 1966 father Myron initiated plans to construct a typical Ukrainian wooden church in the Hutzul pattern. He and the parish committee engaged Julian Jastremsky, A.I.A., of New York as the architect. In October of 1966 the ground on which the new church would be constructed was blessed. Ground was broken on November 7, 1966, and by July of 1967 the concrete foundation and steel superstructure were in place. On October 12, 1968, the first Divine Liturgy was celebrated in the new church.

Later in the same year the Iconostasis was installed, as well as the tabernacle, a wooden miniature of the church. In November of 1977 the outside cross and Icon of the Mother of God were blessed.

On June 25, 1984, Bishop Robert Moskal assigned Reverend Paul Guthrie, O.F.M., and the new pastor of Immaculate Conception, and father Myron retired. Sadly, father Paul’s first task as pastor was to make preparations for the funeral and burial of the only vocation to the priesthood from the parish, Reverend Nicholas Fisanick, who passed away after a long and grievous illness.

In the United Sates there are a few examples of the architecture typified by the Barnsboro church. At the time of its construction Immaculate Conception was the largest structure of this type, the only one with the three-dome type of traditional Ukrainian wooden church architecture, and the only one built by a parish as a parish church. Many of the parishioners’ forefathers came from regions of Ukraine where the surrounding country is very similar to that of the site of the church. High on the hillside, the church will stand in full view of the town and will serve as the landmark to the faithful of the parish. It will always be a visible reminder of the rich heritage and culture of our people and the traditions of their faith.

From 2005 to 2016 there were a lot of priests and deacons who stepped up to minister to the people in the parish.

In 2000 all the Roman Catholic parishes in Northern Cambria were combined into one. Some of the parishioners found home in the Immaculate Conception Ukrainian Catholic Church, who opened its door to all. In the late 1990s the parish started having Divine Liturgies on Sunday Evening, which became very popular for a lot of people in the community.